Orthopedic Wearables: What We Learned from a Year of Data 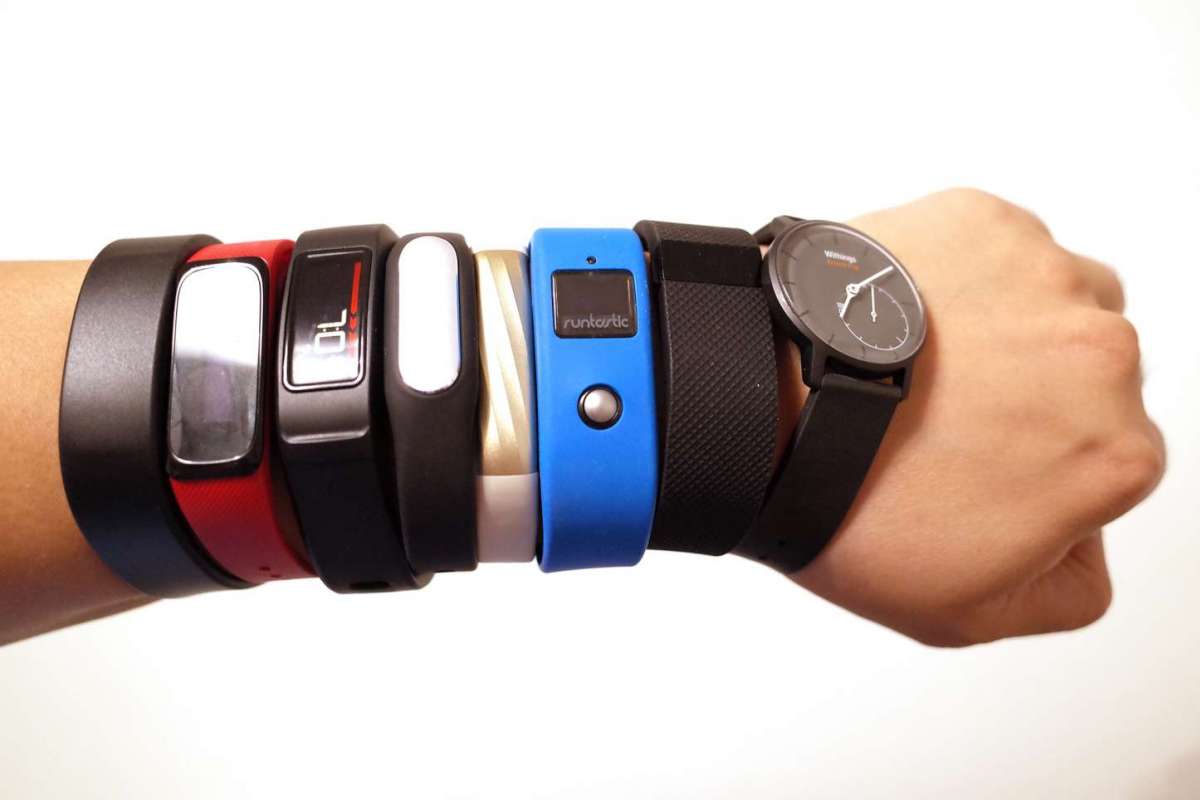 Trying on Orthopedic Wearables: What We Learned from a Year of Data (LinkedIn article by Steven Lyman)
In my previous post, I discussed the power of wearable technology to transform orthopedics. I believe we’re on the cusp of a big breakthrough — a future where wearables send a steady stream of data to the cloud, so doctors can see how patients are progressing in real time and can spot troubling patterns before they become serious problems.
It’s coming, and it’s going to revolutionize how we measurement patient outcomes. But we have a ways to go. And to get there, we need to start testing the waters now, with the tools we have today.
A couple years ago, our team at HSS got our feet wet, seeing what we could learn about post-operative recovery using an ordinary smartphone. The results suggested great potential, as well as some limitations.
An Unexpected Opportunity
My research team is a curious bunch, and by 2014, we were already in the thick of another experiment: tracking our daily activity using our phones to get a sense of data accuracy and explore possible uses. Then we stumbled into an unexpected opportunity. One of our research assistants (who had been a collegiate water polo player) decided to have hip arthroscopy surgery to treat his femoroacetabular impingement (FAI), a common hip joint condition in elite athletes.
FAI is an abnormal collision of the neck of the femur and the acetabulum, the socket of the hip joint. It restricts the patient’s range of motion in the hip, and can lead to pain around the joint. In the past, the standard treatment was intensive surgery with a lengthy recovery time that dissuaded a lot of patients. Now surgeons can treat FAI arthroscopically — that is, using an arthroscopic camera — with significantly less pain and a shorter recovery. We’ve seen impressive results from this surgery, including extending professional athletes’ careers. But we have a lot to learn about the details of recovery.
This was a perfect chance to investigate — since our research assistant had been collecting daily step counts, we already had a pre-surgery baseline. So, for a year following his surgery, we kept tracking his steps, and we used weekly smartphone surveys to track pain level and hip function. He also completed conventional patient-reported outcomes measures (PROMs) surveys every three months, as most HSS FAI patients do.
What Did We Learn?
First, we found that step data and weekly reports showed dynamic changes that we didn’t see in standard PROMs surveys. You can see the extent of the week-to-week variation in the chart below. The blue dots show average counts for each week. The black diamonds represent hip mobility, and the green triangles represent pain levels, as reported in weekly surveys. 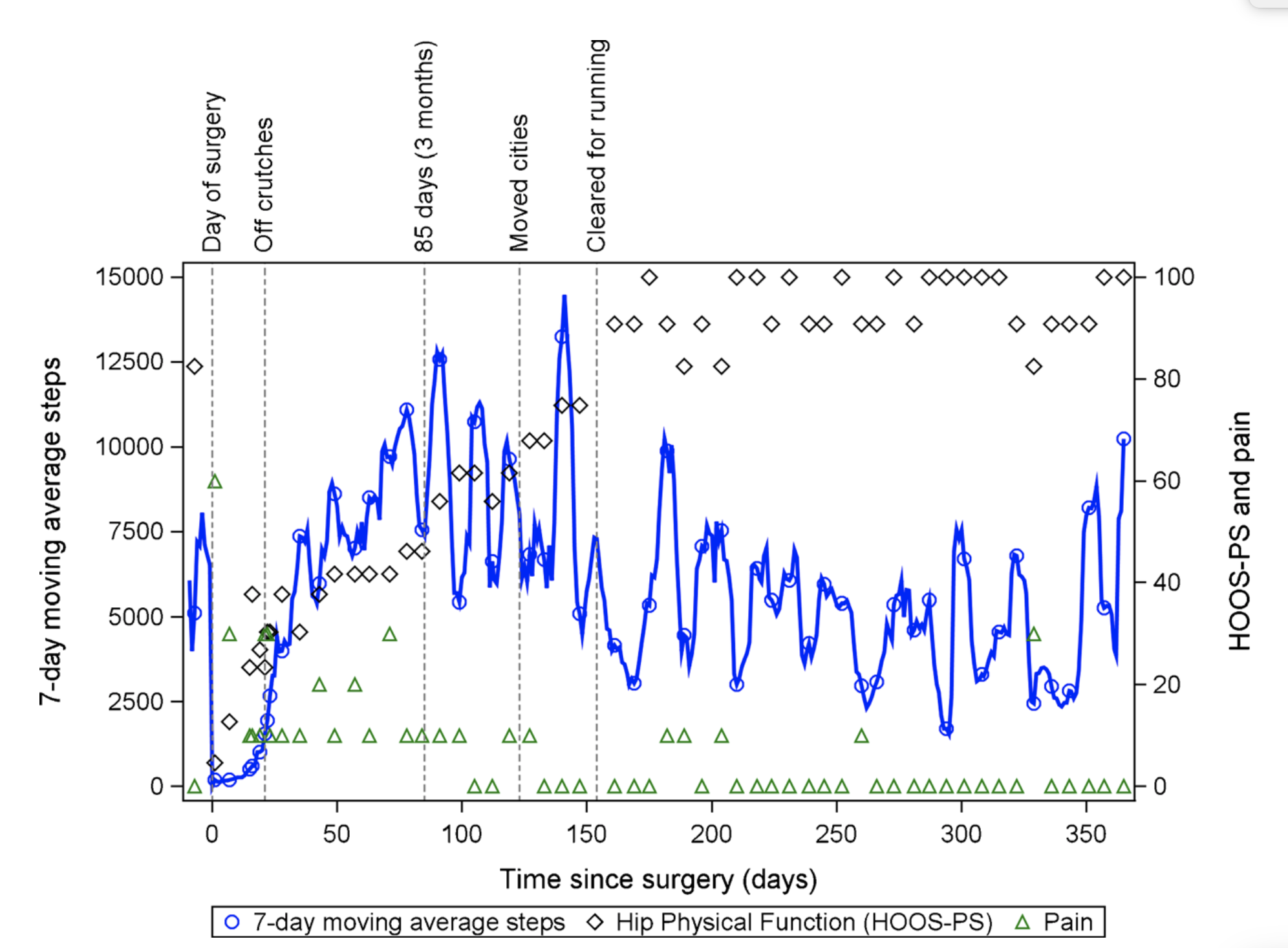 (reprinted with permission from HSS Journal)
This more nuanced picture of a patient’s recovery could greatly enhance the quality of care clinicians can deliver. And having the data in real time would allow a physical therapist to tailor the pace of treatment to the specific patient, rather than following a standardized rehabilitation schedule that might be out of step with their pace of recovery.
We also saw that the correlation between step data and pain and mobility measures weakened over time. This suggests steps may not be a good measure of mobility after the initial stages of recovery. Specifically, step tracker data may be fairly limited for athletes. They tend to leave their phones behind during more strenuous activities like soccer or basketball — or in our subject’s case, water polo. We concluded that smartphone technology was useful in the early post-operative phase, when our subject had limitations on his physical activity. But as soon as he was able to go back to his regular exercise routine, the information became less relevant. Wearable devices like Fitbits could provide more comprehensive picture of recovery, since athletes are more likely to wear these devices during more strenuous activity.
Finally, we found that the data was valuable to the patient. He said the daily activity log helped him to track progress and work towards concrete goals, which increased his confidence and motivation during his recovery.
What’s Next?
While our study showed the potential value of detailed recovery data, we have a lot of work to do to incorporate it into outcomes assessment and to put it into the patient’s hands in a usable, meaningful way. Along with collecting and validating more extensive data, it’s important to develop user interfaces that make it easy for patients to participate. For example, at HSS, we’re piloting a survey app that sends the patient regular push notifications to take surveys throughout recovery while linking to their phone or wearable activity data.
Smartphone technology also seems to hold promise for early warning and predictive modeling. Wearables could show when patients are doing well — or conversely, when they’re doing poorly and need intervention. Healthcare providers have already seen early success using such applications to monitor blood sugar and psychological conditions.
In reflecting on this initial study, I’m optimistic about the future of wearables in orthopedics and in other clinical settings. I’m eager to see this technology bring patient care to new heights.