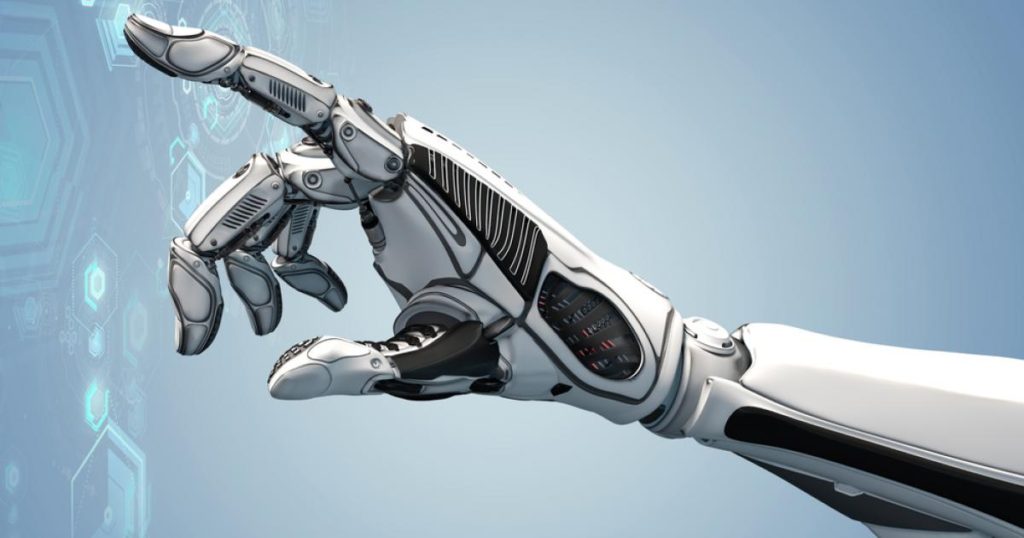 Surgical robotics remains a hot area in medtech — even as it faces headwinds from the COVID-19 pandemic.

Intuitive Surgical (NSDQ:ISRG) pioneered robotic surgery through the early 2000s and remains the dominant player, but major companies including Medtronic (NYSE:MDT) and Johnson & Johnson (NYSE:JNJ) have big plans to enter the space and compete.

Read on to discover the status of 12 companies playing an important role in the robot-assisted surgery space. 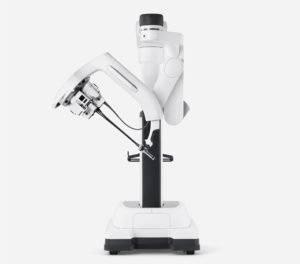 The da Vinci SP surgical system [Image courtesy of Intuitive Surgical]Intuitive Surgical (NSDQ:ISRG) — the world’s dominant robotic surgery company — has found itself in the same boat as many medical device companies making equipment not directly related to the COVID-19 pandemic: Sales took a hit during the second quarter, about a fifth in Intuitive’s case.

The pandemic, though, may have also given Intuitive Surgical extra time to make an economic proposition for potential customers before medtech giants Medtronic and Johnson & Johnson each come out with their own robots to compete against Intuitive’s da Vinci robots.

Intuitive Surgical during the final months of the year plans to introduce an “Extended Use Program” offering select Xi/X instruments possessing 12 to 18 uses compared to the current 10-use instruments. The company during the fourth quarter will also lower the price of certain other instruments most commonly used in lower-acuity procedures.

“If you look out over a couple of years, we clearly think that customers want to use our products. … To the extent that we can help them with economics, we think they have a preference to use our products,” Intuitive CEO Gary Guthart said in a July earnings call transcribed by Seeking Alpha. 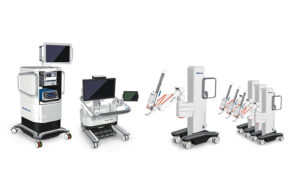 Medtronic’s Hugo robot-assisted surgery system [Image courtesy of Medtronic]Medtronic (NYSE:MDT) meanwhile continues to work on its new Hugo system that is meant to rival Intuitive Surgical’s da Vinci robots. CEO Geoff Martha said in August that the world’s largest medical device company had been able to manage through previously disclosed disruptions related to COVID-19 — as well as resolving software issues. The plan is to file for CE Mark and U.S. IDE approval in early 2021.

“We’re going to be a meaningful player in this market. Go big or go home,” Martha said.

Titan Medical (TSX:TMD;NSDQ:TMDI) has also entered into an agreement with Medtronic to progress the development of robot-assisted surgical technologies.

In the orthopedics space, Medtronic is looking to add enhancements to its Mazor X spinal robotic system.

Johnson & Johnson’s existing Monarch surgery platform [Image from J&J]Johnson & Johnson (NYSE:JNJ) is taking its time on a general surgery robot to compete against Intuitive Surgical. J&J announced in July that it has decided not to follow a 510(k) clearance pathway; the company’s goal is to start first-in-human studies with the system by the second half of 2022.

The medtech giant has been working on combining technologies that came out of its previous Verb Surgical collaboration with the Alphabet (NSDQ:GOOGL) life sciences unit Verily — as well as its $3.4 billion purchase of Auris Health and its FDA-cleared Monarch platform.

“We continue to be impressed by the technology advancements we’re seeing with both the Verb and Verily and the Auris combination. Our teams are making very good progress as we speak,” J&J CEO Alex Gorsky said during a July earnings call transcribed by Seeking Alpha.

During the second half of 2020, J&J is planning a U.S. regulatory submission for robotic knee surgery as part of its Velys digital surgery platform. The robotic surgery technology came out of J&J’s acquisition of Orthotaxy in 2018. 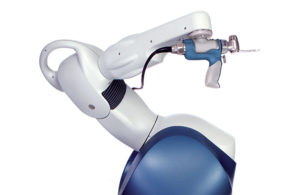 [Mako robot image courtesy of Stryker]Stryker (NYSE:SYK) saw its second-quarter sales slashed by a quarter amid the COVID-19 pandemic, but the company’s Mako robotic systems for knee and hip surgeries remain a bright spot. Stryker is arguably the dominant player in the robotic ortho surgery space, with the company passing the 1,000 mark for Mako installations.

“The lead that we have in robotics is clear, and it’s continuing, and it’s a really a global thing. We have over 28 countries now that have a Mako robot, and that growth will continue long into the future,” CEO Kevin Lobo said on Sept. 15 during a virtual healthcare conference held by Morgan Stanley.

Mako has proven to be a major growth engine for Stryker as health providers buy all of the tools and accessories around the system.

Stryker’s $500 million buyout of Mobius Imaging and its Cardan Robotics subsidiary in 2019 could provide it an avenue to compete against Medtronic in the robotic spine surgery space, though Lobo during the Morgan Stanley conference said the other option would be to come out with a more advanced option through Mako. 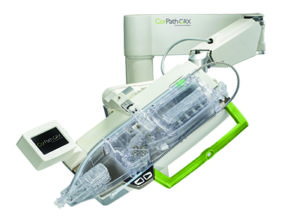 The system has enabled Corindus to be a pioneer in telerobotic surgery. The company was recently the subject of a documentary reviewing the power and potential of 5G technology. Called “The Speed of Thought,” it documented the first transcontinental interventional procedure performed using Corindus’ CorPath system. (Listen to our most recent DeviceTalks Weekly, in which Corindus COO Doug Teany discusses how 5G could enable more remote surgeries.) 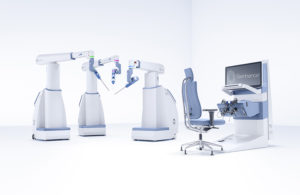 Before the COVID-19 pandemic hit, TransEnterix had been seeking a better year for its Senhance Systems, which boast haptic feedback, surgeon camera control via eye sensing and improved ergonomics.

The company has made a push into augmented intelligence. The new FDA-cleared Intelligent Surgical Unit on the system enables the camera to automatically move for a surgeon during a procedure, responding to commands and recognizing certain objects and locations in the surgical field.

TransEnterix has also experimented with robot leasing agreements to get Senhance into the hands of more surgeons. 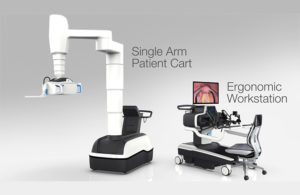 Titan executives were able to turn things around thanks to a $10 million license payment as part of its new development deal with Medtronic (NYSE:MDT). Titan also recently brought in $18 million from a public equity raise.

“We believe that our robotic-assisted surgical system, having been designed with a focus on single-port surgery, may provide competitive advantages for physicians and their clinical teams, hospitals and patients,” McNally said. “Should we be able to complete product development and achieve regulatory clearance in a timely manner, upon commercialization we expect our single-port system to expand the market for robotic-assisted surgery with attractive pricing, a reduced operating room footprint and greater portability within the hospital.” 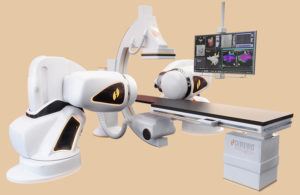 “This technology allows us to positively address the increasing number of patients with complex arrhythmias. In addition, it provides us a competitive advantage to other Nordic centers concerning education and learning,” said Antti Vento, medical director of the Helsinki Heart and Lung Center.

Cleared by FDA and available for both total and unicompartmental knee arthroplasty, the handheld Cori robotics platform is meant to be faster than S+N’s previous Navio system. In addition to Cori, the British medtech giant also launched its Real Intelligence suite of digital surgery solutions that are meant to improve patient engagement, pre-operative planning, digital and robotic surgery, post-operative assessment and outcomes measurement.

The Cori surgical system represent next-generation robotics, according to Dr. Jimmy Chow, an orthopedic surgeon at the Orthopedic Institute of the West.

“Its efficient handheld form factor is ideal for surgery centers, which is where the market is moving, and it just erases away bone with the new bone milling technique,” Chow said in a recent Smith+Nephew news release. “The smart, intuitive software helps place and size the implant as well as balance gaps based on patient-specific anatomy and disease state.”

The new Cori system is small and portable, making it a good fit for ambulatory surgery centers (ASCs) and outpatient surgery. Its modular design means that S+N could scale Cori to handle other types of orthopedic surgeries. 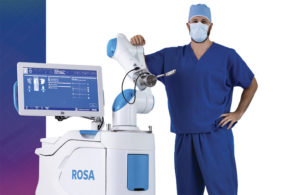 As of August, the company had 150 Rosa knee systems placed around the world.

“Based on the volume of accounts in that pipeline, we’ll be very disappointed if we don’t have between 200 and 300 Rosa systems out in the market by the end of this year,” Zimmer Biomet CEO Bryan Hanson said during an August earnings call. 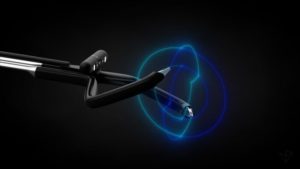 [Image courtesy of Vicarious Surgical]Vicarious Surgical in August announced that it had raised $13.2 million in funding — on top of tens of millions of dollars already raised in recent years. The Cambridge, Mass.–based startup is seeking to develop and commercialize its technology, which applies robotics and virtual reality to minimally invasive surgery. 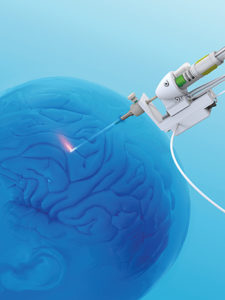 Nearly all of the people treated so far with NeuroBlate had epilepsy, gliomas, brain metastases and radiation necrosis.

“Patients appreciate the minimally-invasive nature of NeuroBlate,” Dr. Stephan Schuele, chief of epilepsy and clinical neurophysiology at Northwestern Feinberg School of Medicine in Chicago, said in a May news release from Monteris announcing the 3,000th patient.

“They usually return home with a minimal hospital stay. It’s become an important tool in our kit for helping people with epilepsy and can make a real difference in people’s lives,” Schuele added.