Likely consequences from the acquisition

The deal will probably pass anti-trust screen, but Stryker may have to divest its STAR ankle business since Wright has a 70% share in the total ankle replacement market.

Wright’s upper extremity business (the original Tornier business) is based in Bloomington MN with a few people in Warsaw IN .

Wright has a direct sales force that will be quickly dissected and integrated into the Stryker sales machine after closing in 2020. 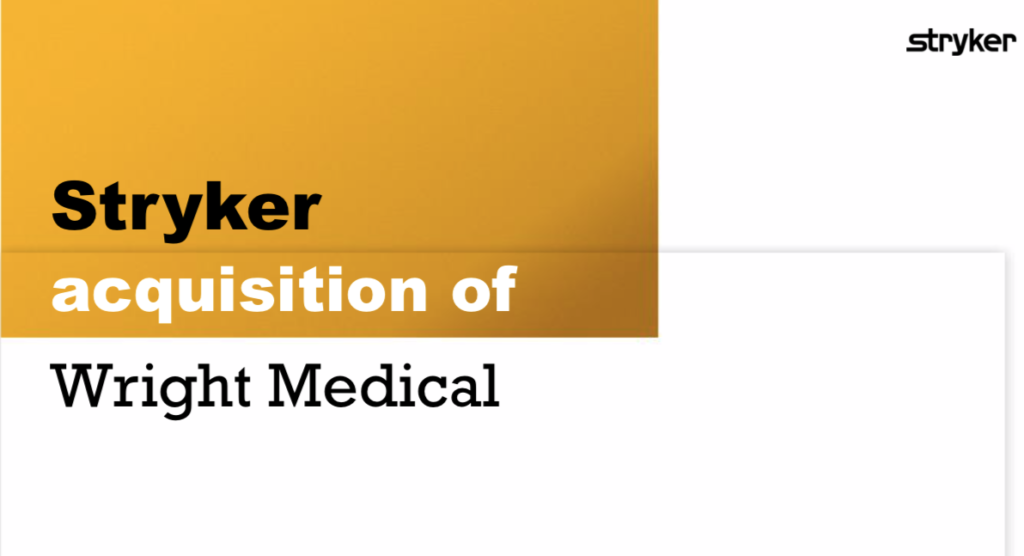 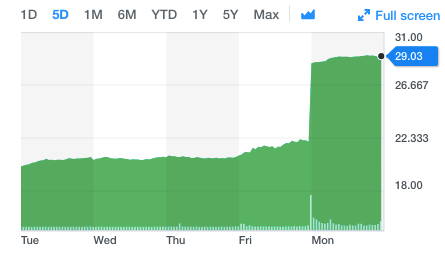 Stryker is set to integrate a company that lost more than 20% of its stock value since its second quarter earnings report in August. Investor uncertainty appeared to stem from disruptive sales force attrition in Wright’s lower extremities business coupled with declining sales of its synthetic cartilage treatment for arthritic toes, which it acquired in its $435 million deal for Cartiva last year.

Wright Medical is expected to generate $900 million in revenues this year. Stryker said it assumes cost savingsof up to $125 million in the first three years after closing.

The announcement Monday morning put an end to weekend speculation stoked by a Bloomberg report saying Wright Medical was exploring a sale. Analysts had pegged Medtronic, Smith & Nephew and Johnson & Johnson as other possible buyers. Executives declined to comment on whether Wright’s sale was a competitive process.

Needham analyst Mike Matson, writing before the deal broke, pegged Smith & Nephew as the most logical acquirer and noted potential antitrust issues in the foot and ankle sectors with a Stryker-Wright union.

RBC Capital Markets analysts shared those foot and ankle antitrust concerns, expecting the combined company to give Stryker “the clear #1 market share position” in that market, ahead of Johnson & Johnson, and require it to unload its STAR total ankle replacement business.

And RBC was skeptical of the deal’s merits.

“We are surprised by the WMGI deal and believe that SYK had better uses of cash,” analysts wrote, also noting a slower-than-expected integration of K2M brings up “questions on whether SYK can integrate the WMGI business without unexpected surprises.”​

Stryker’s Katherine Owen, vice president of investor relations, confirmed to analysts on a conference call the anticipated closure in the third quarter of next year factors in expected Federal Trade Commission review. Owen said it is premature to comment on potential divestitures or products that may be discontinued as a result of the combination.

Stryker appears most bullish about how Wright could bolster its upper extremities business in particular, citing its highly specialized sales force, CEO Kevin Lobo indicated on the call with investors. Lobo said Stryker had “been looking at Wright Medical for a long time.”

Lobo said Stryker has not been as strong in upper extremities with its shoulder products only sold in the U.S. The path to “category leadership” was not as fast without adding Wright, Lobo said. Those comments follow Lobo noting last week that Stryker’s shoulder business lacks “much of a dedicated sales force.”

Interest in that market stems in part from a tripling in the annual number of shoulder arthroplasty procedures during the last decade “due to favorable demographics, expanding indications, and improved outcomes,” Stryker said in its presentation.

The deal dwarfs many of Stryker’s other significant acquisitions, including the $1.4 billion takeout of K2M in 2018 and the $1.65 billion purchase of Mako Surgical in 2013. Stryker management said the deal is being financed through available cash and new debt. In the near-term, Lobo said Stryker still has the capacity to do some tuck-in acquisitions.

Shares in Wright Medical were up about 30% Monday, while Stryker’s stock was down more than 4%.

Wright Medical Group N.V. WMGI, +5.82% today announced that it has entered into a definitive agreement under which Stryker SYK, -1.62% will acquire all of the issued and outstanding ordinary shares of Wright Medical Group N.V. for a total equity value of approximately $4.7 billion, including the value of Wright’s outstanding convertible notes, and total enterprise value of approximately $5.4 billion.

Under the terms of the agreement, Stryker will commence a tender offer for all outstanding ordinary shares of Wright for $30.75 per share, in cash. The boards of directors of both Stryker and Wright have approved the transaction. The closing of the transaction is subject to receipt of applicable regulatory approvals, the adoption of certain resolutions relating to the transaction at an extraordinary general meeting of Wright’s shareholders, completion of the tender offer and other customary closing conditions. The offer of $30.75 per share in cash represents a premium of 52% over the volume-weighted average closing price of Wright ordinary shares over the thirty calendar days ended October 31, 2019, the last trading day prior to speculation that Wright was exploring a sale of the company. The acquisition is expected to close in the second half of 2020.

Robert Palmisano, president and chief executive officer of Wright, said, “We believe this transaction will provide truly unique opportunities and will create significant value for our shareholders, customers and employees. By merging our complementary strengths and collective resources, we will be able to advance our broad platform of extremities and biologics technologies with one of the world’s leading medical technology companies that shares our vision of delivering breakthrough and innovative solutions to improve patient outcomes. In addition, our employees will be afforded the opportunity to be part of one of the world’s best workplaces with greater depth of resources for sustained success in our industry. We look forward to working with Stryker to complete the transaction. Our board of directors believes this acquisition is in the best interests of our shareholders, employees and other stakeholders and has unanimously voted to recommend that Wright shareholders vote in favor of it.”

Wright brings a highly complementary product portfolio and customer base to Stryker’s trauma and extremities business. With global sales approaching $1 billion, Wright is a recognized leader in the upper extremities (shoulder, elbow, wrist and hand), lower extremities (foot and ankle) and biologics markets, which are among the fastest growing segments in orthopaedics.

For further information regarding certain terms and conditions contained in the definitive purchase agreement, please see Wright Medical’s Current Report on Form 8-K, which will be filed in connection with this transaction.

An investor presentation is available at www.wright.com in the “Investor Relations” section.

Wright Medical plans to file its third quarter 2019 Form 10-Q with the U.S. Securities and Exchange Commission prior to the filing deadline, which is November 8, 2019. Due to the pending transaction with Stryker, Wright will no longer issue a press release for its third quarter 2019 results, and Wright’s quarterly conference call, previously scheduled for Wednesday, November 6, 2019, has been cancelled. In connection with this announcement, the company is also suspending its 2019 annual financial guidance.

Wright routinely posts information that may be important to investors in the “Investor Relations” section of its website at www.wright.com. The company encourages investors and potential investors to consult the Wright website regularly for important information about Wright.

Wright Medical Group N.V. is a global medical device company focused on extremities and biologics products. The company is committed to delivering innovative, value-added solutions improving quality of life for patients worldwide and is a recognized leader of surgical solutions for the upper extremity (shoulder, elbow, wrist and hand), lower extremity (foot and ankle) and biologics markets, three of the fastest growing segments in orthopedics. For more information about Wright, visit www.wright.com.