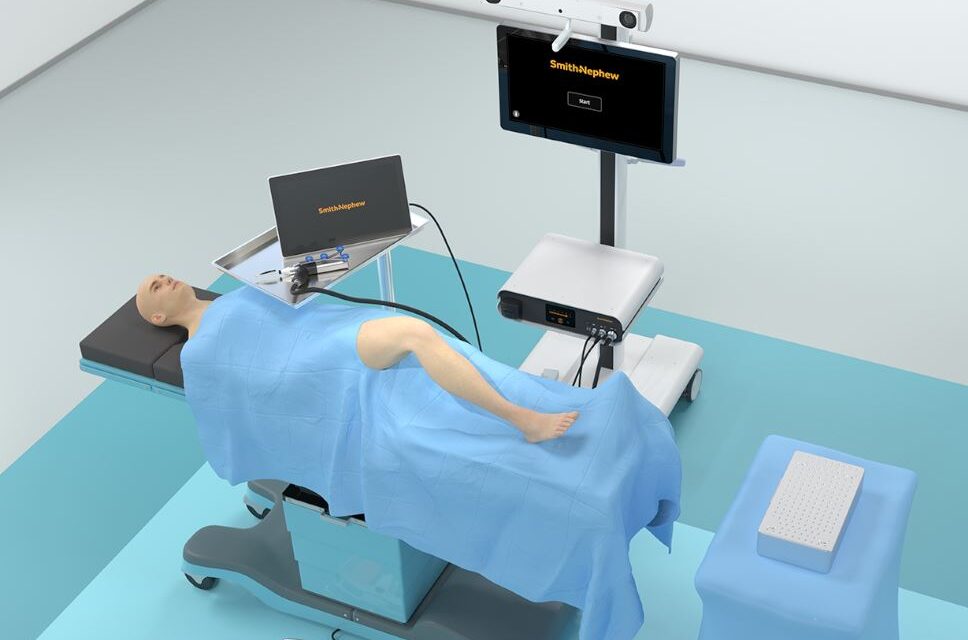 British medtech giant Smith+Nephew chose a different path in the ortho surgical robotics space. One of its top robotics program leaders explains how it could make all the difference.

Faster, smaller and more accessible — those are the three descriptors that Sara Schneider uses to describe Smith+Nephew’s Cori robotic knee surgery system, which launched over the summer.

As the director of robotics program management at S+N, Schneider faced the challenge of making the design and engineering choices behind the company’s next-gen surgical robot.

The Cori robot is a big deal for Smith+Nephew because ortho surgical robotics is a hot area for medtech, even as the COVID-19 pandemic causes health systems to scale back elective procedures.

Stryker has enjoyed a great deal of success with its Mako robots, and Zimmer Biomet is seeking to compete with its Rosa systems. Smith+Nephew is making a bet with a system that isn’t the size of a mini-fridge with an arm, that doesn’t rely on pre-operative imaging, and that includes a handheld cutting tool that can fit a particular surgeon’s techniques.

“There’s more flexibility in the approach when you have that handheld piece that’s not anchored into this mammoth piece of equipment,” Schneider said.

She later added: “I think that the next few months, if not the next few years, will really show us how beneficial that technology is in the hands of surgeons.”

Schneider is an engineer who grew up in Boston. She got involved in ortho surgical robotics after she and her husband moved to Pittsburgh and she took a job as a program manager at Blue Belt Technologies, creator of the Navio robotics system. After S+N acquired Blue Belt and its Navio system for $275 million in 2016, Schneider gained a reputation as an organized manager who could keep the many moving pieces of a project on track. She rose through the ranks to become director of robotics program management.

The Navio system had all of the basic ingredients that would eventually go into the Cori. Instead of using pre-planning and imaging to guide the robot, the surgeon places small, reflective discs at strategic places around the surgery site. The discs bounce back infrared light to optical cameras that serve as a tracker. Once the system has registered the key parameters of the surgery site, the surgeon uses a pointer tool to digitally “paint” over the bone surface that needs to be removed. The surgeon then uses a handheld cutting tool that has a robotic feature that automatically halts the spinning of the tool’s burr if it’s outside the painted area.

“The way that we described this very simplistically is that you could almost perform this surgery with your eyes closed. As long as the surgeon is bringing it close enough, the system will decide, ‘Am I going on or off?’” Schneider said. 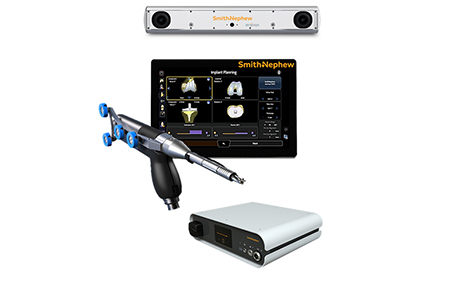 Schneider and her Smith+Nephew colleagues made a faster surgical tool (center) and a console (bottom) that was the size of a large book volume when creating the company’s next-gen Cori ortho surgical robotics system. Optical cameras (top) track the procedure so that the spinning of the tool’s burr automatically turns off when its outside of the operating area — the robotic feature of the system. [Image courtesy of Smith+Nephew]The Navio system was a good start for Smith+Nephew. But after a few years on the market, company officials decided it was nearing its intended life from a design standpoint. To create the next-gen Cori system, Schneider’s team focused on making the surgical tool faster and reducing the overall size of the system so that it could easily go into the outpatient centers that are increasingly becoming popular for orthopedic surgeries.

The new handpiece, according to Schneider, is significantly faster in terms of bone removal and cutting efficiency — reducing surgical time so that the patient has less time under anesthesia and the surgeon can manage their practice more efficiently.

The Cori system is about a quarter of the size of the Navio. While the Navio system stood 3 ft off the ground, the Cori’s console is the size of an Oxford English Dictionary volume and sits on a table.

“I’m working with the technical team and the marketing team to say, ‘How do we meet this user need? How do we compress all of the electronics that we had in Navio into this small console that that’s really more desirable from an OR standpoint?’” Schneider said.

“We had a lot of discussions about, ‘How can we still maintain an ergonomic and aesthetically pleasing console shell without taking up a significant amount of space?’ There are trade-offs between product specifications — performance versus size versus cost of goods. There was a lot of putting our heads together and figuring out, ‘How can we balance all of those inputs to give the user the most valuable product?’”

Fortunately, electronic components technology had progressed enough in just a few years that Schneider and her colleagues had more advanced, compact components to swap into the Cori’s design.

“I’ll credit the engineers for just the layout of all the components. There’s a lot that goes into designing how they all stack amongst one another,” Schneider said.

Now that the Cori system is launched for knee applications, Schneider and her colleagues are looking to expand the platform to surgeries on hips and other joints. They’re also looking at additional attachments and accessories to improve user experience, and there’s the prospect from an R&D standpoint of packing in more artificial intelligence capabilities down the road.

“There’s no shortage of work, and we’re excited about what’s to come,” Schneider said.

Schneider recalled that when she joined Blue Belt Technologies in 2014, she was one of only a handful of women in the Pittsburgh facility. These days, about a third of the employees in the robotics group are women — a development Schneider credits to Smith+Nephew’s dedication to hiring women and running robust mentorship programs.

Half of Schneider’s eight direct reports, in fact, are women.

“If you hire a lot of people that have the same viewpoints and opinions, you’re not going to have folks challenge one another. And when that starts to happen, you don’t end up with the most superior product,” Schneider said. “When I’m looking at hiring people again, I’m thinking about, ‘How can I bring in a new person with a new viewpoint that can challenge the voices that we already have on our team?’”