Digital management will clean up your messy Loaner Set Program 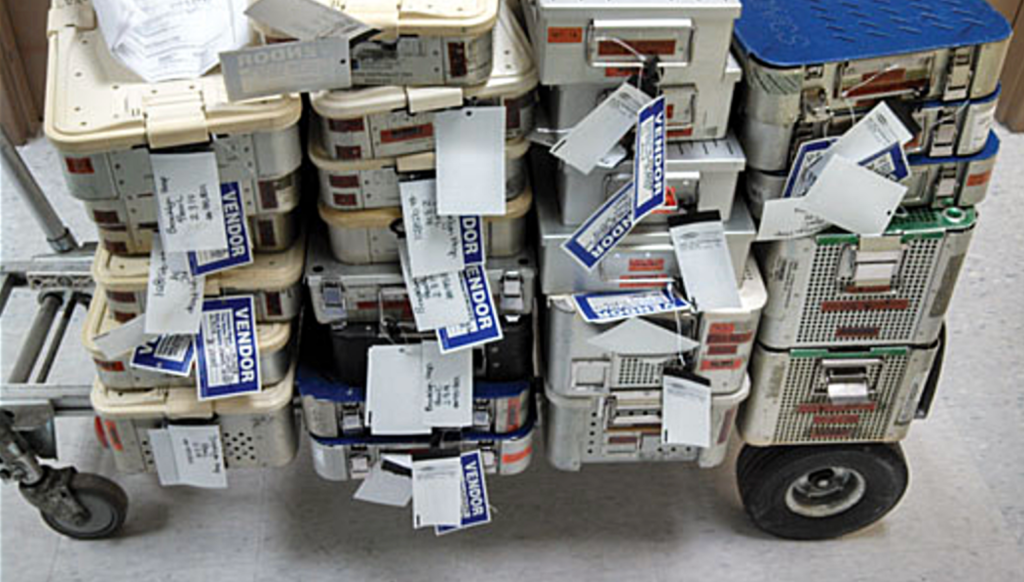 The orthopedic implant/device industry has a challenging mess on it’s hands.  Evermore vigilant to drive asset turns, the OEMs are less inclined to consign implant sets to sit on a hospital shelf.  “Loaning” the sets and trays on an as needed, per case basis drives asset turns, which means higher ROI on these assets.

This is a good thing for operations and profits.

However the move to just in time  delivery, combined  with lumpy demand prevalent in surgical case volume creates asset availability issues, and pressure for on-time delivery of product.   Sales reps, who quarterback the process, are under increasing duress to deliver the right equipment on time for their customers.  “Turn downs” (equipment not available), incomplete sets, and last minute deliveries (which put pressure on hospital staff and established safety protocols) are an increasing problem.  Behind the scenes, the reality is that the whole loaner process for orthopedic trays can be a complete fire drill at times.  Sales reps know this all too well.

This is a bad thing for customer satisfaction and patient safety.

The challenge is, how do we fix the latter without affecting the former?

Lets first look at how things work.  The sets/trays are sent in via courier, overnight delivery, or delivery by sales reps a day or so before the surgery is scheduled.  They must be washed and then sterilized according to manufacturer specifications.  Some surgeries such as joint replacement/reconstruction require numerous sets.  Trauma sets represent a particular challenge as they are for non-elective surgery typified by huge seasonal increases (warm weather is “trauma season”) –  and there is little advance notice of the cases.

Up in the O.R. during the case, a sales rep is present to assist the O.R. staff and surgeon in the utilization of the sets and trays.  The sales rep also carefully records what was used from the tray for implants.  At the end of surgery, the sales rep confirms with the circulating nurse what was used, which will used for billing and the patient record.  If for any particular reason a sales rep is not available for the case, documentation can be a real mess because the OR staff has little familiarity with the implants and part numbers in the trays.  Implant part numbers used are often mixed up or incorrect.

Once the sets have been used in the O.R., they are sent back down to SPD (sterile processing) to be cleaned/washed, reassembled, and returned via courier or overnight delivery back to the OEM.  Once there, they are washed again and audited for both implants (missing) and instruments.  That’s when the paperwork trouble can begin.

The orthopedic tray being audited might have up to 60-70 instruments and hundreds of implants.  Without going into boring details, suffice it to say that the hospital implant usage record often may not match the OEM set audit record.  Also, instruments not present are recorded as being “missing”, and from the OEM perspective, billable. This manual audit process is long, error prone, and not conducive to quick turn around time (which drives can lower asset turns).    It also leads to a longer billing cycle as reconciliation of discrepant records can take weeks.,  The lost/or misplaced (often thousand dollar) instruments are often “eaten” by the OEM, or if they are billed they are highly aggravating and costly to the HCP.  It can turn into a finger pointing exercise, which is not a good practice to get into with customers.  Its just not an inefficient way to do things.

Summate’s Velox software and TAG tray and instrument marking technology would go a long way to solving some of these problems through scanning.  Instruments could be scanned at each critical juncture, which would lower incidence of lost or misplaced instruments or at least provide information as to when they went missing. This makes sense with thousand dollar instruments.   Implants scanned at point of use during surgery would lead to more accurate patient records.  And the OEM set receipt audit process,  completed by scanning and counting each implant site on the tray, would lend a measure of automation and greater accuracy to the current method.   The key point is that the weak link in the loaner cycle is always human error.  Scanning helps take most of the human error out of the equation.

Digital management for loaner sets would:

The OEM device industry has been losing millions of dollars in revenue through a completely manual loaner tray audit system. Hospitals have been forced to cut corners on established safety protocols to make sure last minute deliveries get to the O.R. in time for surgery.   Introducing DMOT to the process, while not a panacea, would would be a step in the right direction to mitigate these problems with the current system.