A look back at the kyphoplasty story, a true “game-changer” in orthopedics 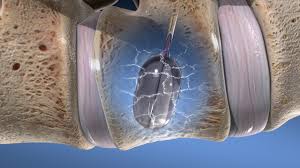 “kyphoplasty is today a minimally invasive procedure used to treat vertebral compression fractures by inflating a balloon to restore bone height then injecting bone cement into the vertebral body”.

In the past, balloon kyphoplasty was the name of a new procedure created and marketed by a company called Kyphon Inc. founded in 1994. This start-up (at that time) was focused on this new minimally invasive treatment of spinal fractures that they called balloon kyphoplasty, the name drawn from the Greek word kyphos, or “bent.”It was essentially an improved form of vertebroplasty, a procedure in which cement is injected into the fissures of collapsed vertebra to provide reinforcement and pain relief, although the vertebra remain collapsed. 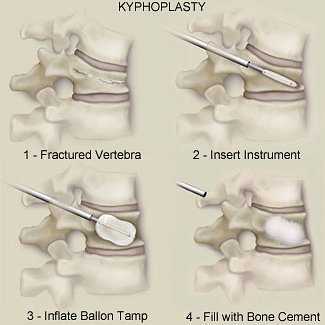 The man who conceived of balloon kyphoplasty was Dr. Mark A. Reiley. After receiving an undergraduate degree from Claremont College in California, he earned his medical degree from George Washington University School of Medicine in Washington, D.C., in 1979. He then received five years of orthopedic training at the University of California, San Francisco, where he was a fellow in the Musculoskeletal Tumor Clinic at the school’s medical center. It was here that Reiley attended a patient who suffered from multiple compression fractures of the spine. His efforts to provide help were frustrated by the instability of the bones and pain caused by the fractures. He began thinking of a way to stabilize such injuries.

As an orthopedic surgeon in Berkeley, California, Reiley toyed in 1984 with the idea of restoring the lost shape of a vertebra by creating a gap that could be filled with bone cement. According to Forbes, “He dove into spines of cadavers with tiny jacks, scrapers, expandable rotors, lasers and ultrasound when he happened upon a stock of balloons used to clear small kidney stones.” Reiley tried out the balloons on the cadavers, and then began working with surgical product developer Arie Scholten, to establish the basic elements of balloon kyphoplasty.

Reiley and Scholten looked for a way to develop the procedure commercially and bring it to patients. They turned to the obvious places, the top orthopedic and spine companies, but the procedure they proposed seemed too radical and no one was interested. It was at this point, through a chance encounter, that Reiley met a former biotech executive named Karen Talmadge, who held a doctorate in biochemistry from Harvard University and had dealt with the orthopedics sector while serving as a chief executive. She was intrigued enough by the elegance of the procedure to study clinical literature, and soon realized that it had a great deal of commercial potential due to the large number of patients suffering from the kind of spinal fractures the procedure could address.

When and How was Kyphon Inc Founded?

In early 1994 Reiley, Scholten, and Talmadge incorporated Kyphon in Delaware. Talmadge engaged in the task of attracting venture capital to make the company operational. It proved to be a tough sell, however. Talmadge spent nearly three years attempting to gain support from venture capitalists but with no success. They expressed concerns about the procedure winning U.S. Food and Drug Administration (FDA) clearance and the willingness of insurers to reimburse for it. “But what these reasons told me,” Talmadge said in an interview with Medical Device Link, “was that investors were most concerned about the risk associated with backing an idea that would change the practice of medicine.”

In 1996 Talmadge finally found someone she thought would be open to backing a revolutionary medical approach: Jack W. Lasersohn, a general partner at the Vertical Group, a Summit, New Jersey-based venture capital firm that specialized in medical technology and biotechnology. Talmadge had attended a lecture Lasersohn delivered about the medical devices that investors had failed to back because of a reluctance to challenge accepted medical practices. In particular he referred to the promise of balloon angioplasty, a procedure being developed to open constricted arteries. Afterward Talmadge met with Lasersohn, who was indeed receptive to Kyphon’s use of balloons to repair spinal fractures. “I have to admit, this was one of the best ideas I had ever heard,” Lasersohn told San Jose Business Journal. “I love balloons, and the spine, well that’s an enormous market.”

Lasersohn then sold the New York-based private equity fund Warburg Pincus & Co. on the idea, and together the two firms provided $1 million in seed money. Kyphon sought input from the leaders in the spine field, targeting the most skeptical, in the belief that when the procedure gained regulatory approval their endorsement would carry the most weight in the marketplace. In July 1998 the FDA approved the use of inflatable bone tamps, and in that same year the first balloon kyphoplasty procedure was performed. The company continued to raise venture capital money, which ultimately totaled $40 million. Talmadge, who had served as the company’s chief executive since its founding, stepped down in November 1998, replaced by Richard D. Murdock, the former CEO of CellPro, a provider of blood cancer treatments.

Early in 1999 Kyphon began to assemble a direct sales and marketing operation and by the end of the year posted sales of $261,000. In May 2000 the company initiated a full commercial rollout of what it called the KyphX System in the United States and sales began to grow at an exponential rate, as positive results from clinical studies and the company’s educational efforts made steady progress in convincing doctors to consider the new procedure and then received training to perform it. Sales increased to more than $6 million in 2000 and topped $36 million in 2001.

In July 2001 Gary L. Grenter was named president and CEO. He was the former chief executive at Biolectron, Inc., a company involved in the spinal fusion, fracture healing, and arthroscopy market. Under Grenter, Kyphon took steps to go public. After the company failed at one attempt, it succeeded in May 2002 with US Bancorp Piper Jaffray managing an initial public offering (IPO) of stock that raised $103 million for the company. Grenter’s tenure did not last much longer, however. He resigned to “pursue other interests,” and the reins were turned over to Richard W. Mott, named president and CEO in September 2002. Mott had been a top executive at Wilson Greatbatch Technologies, Inc., a maker of implantable medical device components. He took over a company that had a great deal of potential but lacked administrative structure and a clearly defined strategy. It fell on Mott to build a foundation that would allow the company to retain talent and attract new employees. Because Kyphon did not even have a human resources officer, one of Mott’s first tasks was to fill that position. He recruited Steve Ham, a former Hewlett-Packard executive, who played a key role in fleshing out Kyphon’s corporate culture. At the heart of it lay education. Just as the company grew by educating physicians about balloon kyphoplasty, so too did it invest in the continued education and personal development of its employees, as well as their families. Ham also played an important part as Kyphon expanded its organizational infrastructure, adding more senior leadership to support a rapidly growing workforce.

Sales increased to $76.3 million in 2002. The following year the company expanded its sales team, which helped grow revenues to more than $131 million in 2003 and led to the first profitable year in Kyphon’s history. When the company netted $27.3 million. To support its growth, Kyphon moved into a new corporate headquarters in Sunnyvale with more than twice the space of the previous facility. The number of spine specialists trained worldwide in the procedure numbered 3,900, up from 2,700 in 2002 and 1,500 in 2001. Kyphon also set itself up for continued growth through the launch of a dozen new products in 2003. In addition, the company completed the acquisition of a German biomaterials company, Sanatis GmbH for $4.5 million, picking up the right to a calcium-containing bone filler.

At this stage Kyphon was not able to offer a complete system, and surgeons relied on bone cement produced by other companies. Neither could Kyphon make claims about the clinical benefits of balloon kyphoplasty. These drawbacks ended in 2004 when Kyphon made further filings with the FDA and received clearance to sell a bone cement specifically for use in the spine. The FDA also agreed that the clinical data the company provided about the effects of the procedure was sufficient to allow Kyphon to promote claims about the effectiveness of the treatment. Sales increased to $213 million in 2004, and helping to fuel further growth the company also received good news on other fronts. The Centers for Medicare & Medicaid Services established reimbursement codes for balloon kyphoplasty, a move supported by the American Medical Association, setting the stage for physician and hospital reimbursement for the procedure across the country.

About 50,000 patients worldwide underwent balloon kyphoplasty in 2004, a number that increased to 73,000 in 2005, leading to a 43 percent increase in sales to $306 million and net income of $29.8 million. The company enjoyed continued growth in 2005, when sales improved to $407.8 million and net income approached $40 million. Success did not come without some measure of controversy, however. Early in 2006 Kyphon and Dr. Harvinder Sandhu, who had licensed an expandable, mechanical bone tamp to the company, sued Medtronic Sofamor Danek, accusing it of trade secret theft, fraud, breach of contract, and other charges. In the late 1990s Medtronic had elected not to license Sandhu’s invention and a year later patented a device to treat vertebral compression fractures using a similar bone tamp. Medtronic maintained that because Kyphon was the only domestic player in this niche market it was simply trying to keep Medtronic and others from entering it. Four months later Medtronic filed its own lawsuit against Kyphon, alleging that four of its patents related to balloon-dilation catheters and spinal treatment had been violated.

Also in 2006 Kyphon was joined in a different kind of controversy, stemming from the days it had reached out to prominent spine researchers. One of the most prominent in the field was Cleveland Clinic orthopedic surgeon Dr. Isador Lieberman, who had been a major supporter of balloon kyphoplasty. However, in late 2006 he was regaled in the press for also having a financial interest in Kyphon, receiving valuable stock options in a company whose procedure he was touting. Lieberman was well aware of the clinic’s conflict-of-interest policy because he sat on the panel that dealt with the issue. He was required to tell patients of his financial interests if they asked, but did not have to volunteer the information. While Lieberman argued that his support of balloon kyphoplasty was based on the efficacy of the procedure, he was also connected to seven other orthopedic device manufacturers, from whom he might receive stock, royalties, and consulting fees.

To help sustain its strong growth and achieve some diversity, Kyphon reached agreement on three acquisitions in 2006. Early in the year it acquired InnoSpine, Inc., which held FDA-cleared technology for the diagnosis and possible treatment of axial low back pain caused by disc degeneration. Late in the year, Kyphon announced two agreements with an Israeli company, Disc-O-Tech Medical Technologies, Ltd., to acquire its spine-related assets, which included a vertebroplasty system and the B-Twin Expandable Spinal System, which uses an expandable interbody device to treat degenerative disc disease in the lumbar and cervical spine. Kyphon also agreed to acquire St. Francis Medical Technologies Inc., an acquisition that was completed in January 2007. The Alameda, California-based company brought with it the X-STOP System to treat lumbar spinal stenosis.

Medtronic, Inc. and Kyphon announced in July 2007 that the companies had signed a definitive merger agreement under which Medtronic acquired all of the outstanding shares of Kyphon for $3.9 billion.