6 Questions with Nissan Elimelech, founder of Augmedics, who is leading the way in AR surgery. 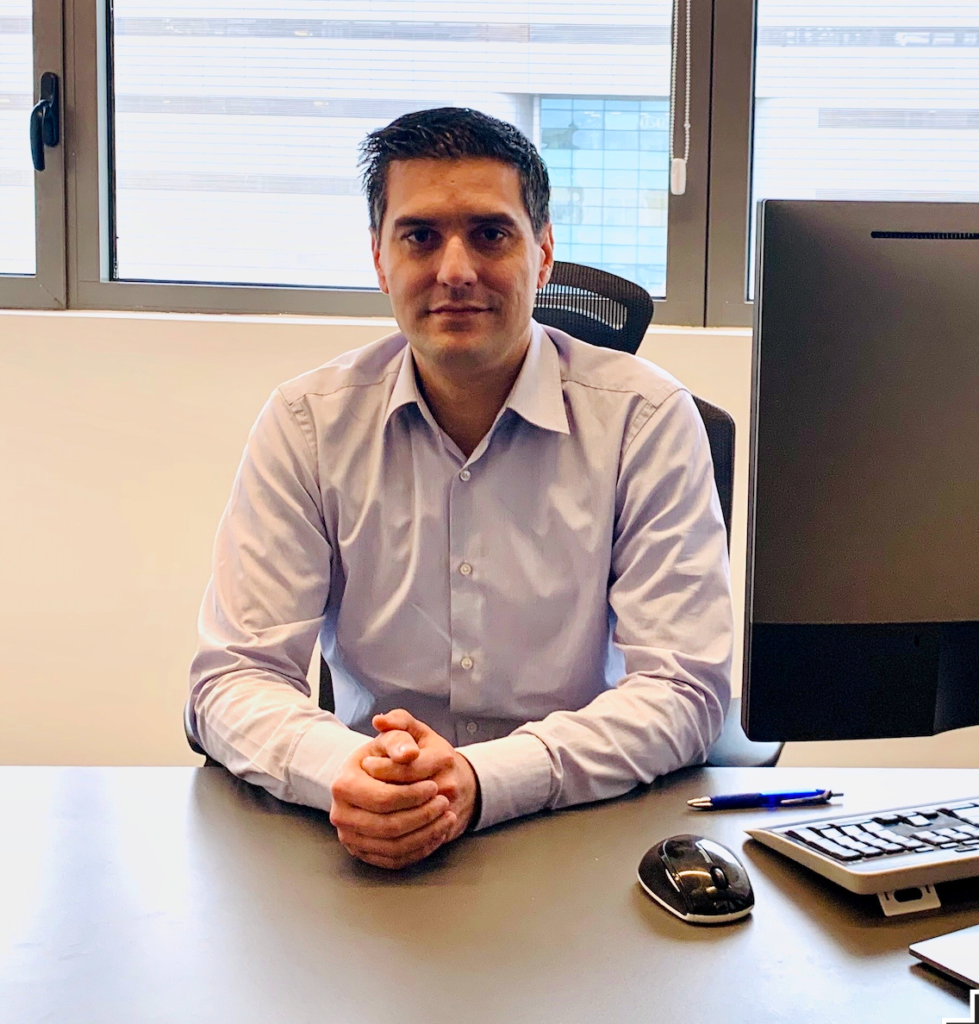 This is the 15th in a series of 6-Question interviews with leaders who are challenging conventional thinking in Orthopedics (read other interview here).

Augmented Reality (AR) surgery is the future of orthopedics and spine surgery. Augmedics just received FDA clearance and will be bringing x-ray vision to US spine surgeons…  literally x-ray vision.

While the entire orthopedics industry is focused on large navigation systems and robots, Augmedics snuck in the side door with seamless heads-up display technology.

I sat with Nissan to better understand how Augmedics is leading the AR revolution in orthopedics.

1. How did Augmedics get started?  Take us back to the inception of the idea.

I had been working in the medical device industry for 10 years, and while at Medtronic, I worked in the Spine Surgery Unit in Israel.   I found it very frustrating to see that after spending a one-year sales cycle trying to sell navigation with an intraoperative 3D scanner to spine surgeons, then having them spend about a million dollars on the solution, to have them hardly use the technology.  I was trying to find a better way for surgeons to use computer assisted technology to help them guide their screws into the correct position.  One of the things I had in mind is that it will be very cool if we could give the surgeons superpowers, like superman, and give them the ability to see the anatomy of the patient right through the skin and tissue, as if they had “x-ray” vision.  So, I started to investigate the different technologies available, and I found that Augmented Reality was a very suitable solution.  As soon as I realized that it was feasible, I decided to leave Medtronic and start Augmedics.  We started Augmedics in 2014 and developed the xvision and brought the idea to life.

2. How was Augmedics funded so far and what does the team look like in 2020?

We started in 2014 with 5 people working in a small space.  In 2015, we were funded by one of the Israeli early stage venture capital firms, TerraLab in Yok’neam, with $800,000.  This sustained the company of 5 people for about 2 years.  Just to put it in perspective, right now $800,000 would sustain us for about 1 month.  During those 2 years we did a proof of concept for this technology, a clinical trial, and we even got to the point where were doing cases in Israel.  In 2017, after 2 years of work, we went to Series A where we raised $7M from AOInvest, who was our lead investor, and others.  We have since recruited more people to join the company and right now we have 38 employees; 25 in Israel and 13 in the US.

3. Please describe the technology and the benefits.  What kinds of surgeries do you see benefitting the most from xvision?

When I started Augmedics, I thought that spine surgery had the greatest need for this type of technology.  For us, it’s low hanging fruit because most spine surgeons are not using any navigation in their practice.  Navigation has been available to spine surgeons for over 20 years but has not been well adopted for various reasons.  The main reason, I think, is ease of use.  When spine surgeons guide their screws, they need to look at their hands and at the patient. It’s very challenging to also look aside at a distant screen to navigate the screw correctly with traditional navigation. 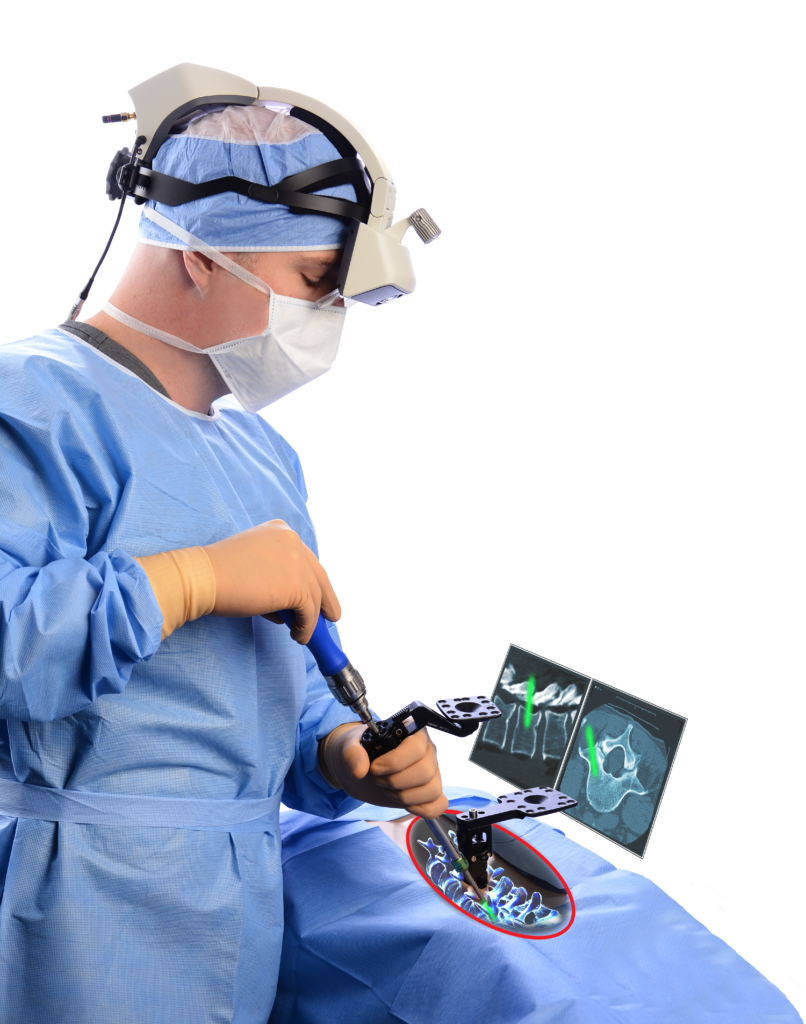 So, I think that what we have developed with Augmented Reality, in providing a 3D overlay of the patient’s spine right on the patient, is groundbreaking technology that will increase the usage and will have very good adoption for spine surgery.  We also believe this platform may be very useful in other applications such as cranial surgery, ENT, joints, and trauma.  After we release the spine application, we will continue to develop more applications for other surgeries.

4. How does this technology compare to other image guidance or navigation technology?

With xvision, we use the same fundamentals of conventional surgical navigations systems.  We place the reference frame on the patient, we do the registration using preop or intraop CT scans, and we use the optical tracker used by conventional surgical navigation systems.  However, in conventional navigation systems, the surgeon views all the information on a 2D flat screen that is located 10 feet away, so he always needs to look aside and not look at the patient while he’s navigating his instruments.  But with the xvision system, we project the 3D image of the navigation data directly to the retina of the surgeon, so all our components are contained in a very small and lightweight headset.  There is no bulky camera or workstations, it is all inside of the headset.  And that is what is makes it different in what we have developed versus traditional surgical navigations systems.  Not only does he see the information in front of him, while he’s looking straight at the patient, but all the information is in a very realistic 3D model of the spine on the patient.  So that is what is the main benefit and change in technology compared to traditional navigation technology.

5. What markets are you targeting first, second, third?

We are targeting the US market first.  We think it is the most important market in the world.  If we succeed in penetrating the US market, I have no doubt that other markets, as in Europe, China and the rest of the world, will follow.  We will focus on the EU next and plan to submit for our CE mark application next year.  So, at the end of 2020, we hope to start commercializing our system in Europe.

6. Where do you see Augmedics going in the future?

I think that the platform that we have developed will be useful not only for spine, but also for many other applications. I see the xvision technology being the standard of care in most, if not all, orthopedic and cranial surgeries.  I believe that it will be considered almost a malpractice not to use any sort of computer navigation, because it gives such critical information.  I think over the years, surgeons will prefer to use our xvision technology and not conventional navigation because of the intuitive design and I believe it will become the standard of care in the coming years.